The paintings are stunning representations of a ‘vanished world’ that was once so vibrant, better remembered with such color and clarity.
- Editors comment from The Galitzianer Journal 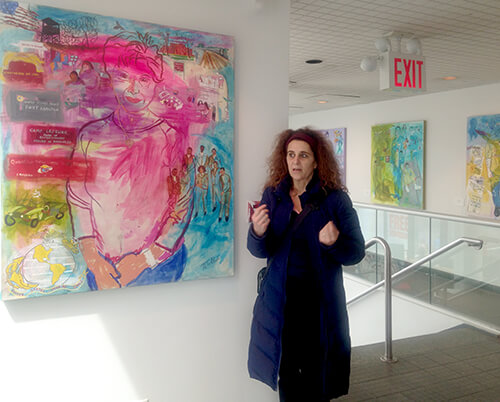 New York painter Nina Talbot captures and elucidates personal histories as she integrates the depiction of individuals and their stories in her vibrant portraits. For decades, Talbot has been painting her subjects and their un-told narratives, turning the seemingly ordinary into the extraordinary with her focused attention. She has shown in solo exhibitions at The Bronx Museum of Art, The U.S. Army Heritage Education Center in Carlisle, Pennsylvania, The Puffin Foundation, The Women In Military Service of America Memorial at Arlington, The U.S. Department of Veteran Affairs Museum in NYC, the Brooklyn Historical Society in Brooklyn, NY, and The Brooklyn Public Library in Brooklyn, NY. Group exhibitions include shows at The Brooklyn Museum of Art, The Bronx Museum of Art, The Staten Island Museum and The Ingber Gallery, Art in Embassies program, Sri Lanka and inclusion in the Smithsonian tour, "Three Brooklyn Artists". Talbot’s works are in the public collections of the Brooklyn Historical Society, Procter & Gamble, the Cape Ann Museum, The Lincoln Plaza Cinemas, and the Hospital for Special Surgery. In September 2015, Talbot’s commissioned mural of images interpreted from The Old Testament was installed at The Polish Jewry Heritage Center in Dynów, Poland.

Talbot’s work displays an appreciation of the people around us, illuminating how their stories reflect and represent the complex of history of the United States. Talbot has interpreted her environment through portraiture, using a range of subjects, from supermarket workers stocking cans of tomatoes and the photo developer from Kazakhstan, to the war-torn portrait of a Vietnam veteran. While the images reflect aspects of classical portraiture, they convey depth through imagery of the stories and histories of their subjects. Talbot’s work is a rigorous study of human life, imbued with elements of oral history, storytelling, and national and global histories including domestic and foreign war, and immigration and migration.

After graduating from the High School of Music and Art in 1971, Talbot studied at the Art Students' League, The Philadelphia College of Art, and The New York Studio School of Drawing, Painting and Sculpture. In 2008 Talbot’s images of her neighborhood “mom and pop shops” from the series “Vendors of Brooklyn” were published in the Brooklyn Historical Society Flatbush Neighborhood Guide. Her murals were included in the recent publication, On the Wall; New York City Murals. Talbot was one of the principle artists who worked on the Artmakers mural, “When Women Pursue Justice” with her portraits of Gloria Steinem, Betty Freidan and Nina Simone. She was awarded two artist grants from the Brooklyn Arts Council in 2001 for her “Shoprite” series. Talbot’s image was the winning selection in a competition held by the Health & Hospitals Corporation for their “New York Cares” campaign in 2006. She has served as an educator, consultant and panelist for Brooklyn College, Mercy College, Studio-In-A-School, the Lincoln Center Institute and Young Audiences for thirty-five years.

Talbot’s recent work involves research and travel to her ancestral towns in the former Galicia, the area of Poland and Western Ukraine, formerly a province of the Austro-Hungarian Empire. Her painting images highlight memory of the Jewish communities that flourished in this part of the world and its tragic destruction at the hands of the Nazis.